Skip to content
Sing Your Ownership Song
Schedule a Call

Avoid a cultural swan song, grab the “ownership microphone” and sing along with these bands to develop your company’s culture, define employees’ roles as owners and drive ESOP stock value.

Do you know where you’re headed in building your ownership culture? In other words, is everyone going in one direction? Successful ESOPs define their goals before beginning their ESOP communication, training and engagement effort. They invest time creating a personalized plan and clear objectives for their ownership-development process.

Agreeing on a solid strategy will enable you to measure success, determine whether you’re on track and justify the investment of time, resources and energy the effort. If you don’t develop a concrete plan, instead of singing, your ESOP may find itself living Lewis Carroll’s quote: “If you don’t know where you are going, any road will get you there.”

In terms of employee ownership, you can re-spin the Village People’s party and wedding anthem YMCA into an ESOP-development effort: You Might Consider An (ESOP Committee). 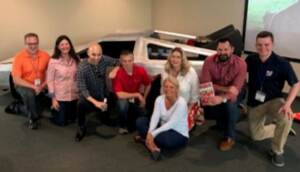 If you’re considering one to build and sustain your ownership culture, you’ll want to avoid the deadly sins of ESOP Committees. To start, you can sidestep the first sin by defining the role, function and purpose of your team. Engaging leaders in the effort, before you create the Committee, will help you avoid another one (learn about all the Deadly Sins of ESOP Committees here https://workplacedevelopment.com/committee/).

Populate the Committee with your own Village People. In other words, a diverse group that represents your company in terms of tenure, gender, location, job type and ESOP experience. If they can sing, consider that a bonus.

Culture is a key element in your ESOP’s success. Central States Manufacturing, a 100% ESOP with facilities in nine states, created eight cultural pillars to developing and sustaining its ownership culture. The company involved leaders and employees in the process of defining their roles and responsibilities to support those pillars.

“The leader/management responsibilities we identified at Central States included sharing and communicating, educating, building relationships and providing opportunities for people to be part of our team,” said John Williams, the company’s VP of Sale. “Our leaders’ roles supported and linked to employee-owner responsibilities. Those included being committed to our customers, having a voice (and using that voice in a positive way), continuous improvement and seeking to learn.” 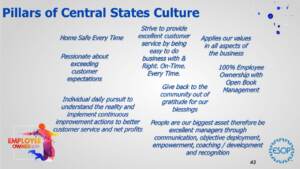 Engaging people in the process of defining their roles and responsibilities was an important cog in the effort’s success. “When people are involved in creating your ownership culture, it becomes their culture, not yours. That creates a culture that everyone is much more likely to own,” said Williams.

Successful ESOPs refresh and reinvent their communication and training. The annual statement distribution process is a perfect time — a new, green day — to reboot your communications (i.e., create something fresh and different). Because when the statements arrive, people have an “itch” you can successfully scratch with your training process.

There was probably a lot of enthusiasm and hoopla surrounding your first statement’s distribution. Those positive vibes, alas, tend to fade over time. To recapture that original excitement and reinvigorate the communication process you can:

In your ownership-culture journey, you will encounter many obstacles, challenges and setbacks. The road to building informed, engaged employee-owners is far from a straight line. No matter the road’s direction, leadership commitment is the bedrock supporting it because success takes time, resources, energy and effort. If leaders don’t support it, your effort will eventually fail.

Another key, especially for new ESOPs or veteran employee -owned companies struggling to reboot their culture, is recognizing that people don’t change overnight. There is no magic dust you can sprinkle around the office, call center, warehouse or shop to transform employees into engaged owners. Utilizing the ideas in this article, however, will help accelerate your effort.

This article is based on a presentation John Williams and I belted out at a recent ESOP conference. If you want a PDF copy of it, contact me at jbado@workplacedevelopment.com