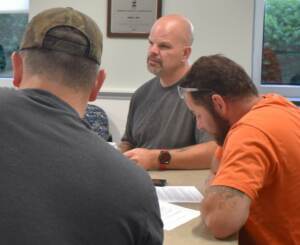 Experience is a powerful teacher. You don’t get a driver’s license just by reading about how to drive a car; you must practice driving the car, too! That’s why understanding your ESOP doesn’t end with one-way communication of the plan rules. In Workplace Development’s ESOP Game, employee owners dive into a business simulation where they actually feel what it’s like to make tough business decisions because they make them. They see the impact of their decisions and what influences the stock value in their ESOP accounts over the course of several simulated “years”.

“As a new employee, before playing the game, I only sort of understood the ESOP. It wasn’t until I played the game that it started clicking for me and how it was different than anything I had ever known,” shared Software Solutions, Inc., Vice President of Administration Linda Jones. That’s why Jones offers the game every year during their ESOP celebration month to the new hires that year, or as a refresher for older employees. “When you play the game, things start clicking. When you make a profit in the game, you realize that every decision made has a consequence. For example, if you raise salaries too fast, you may not be able to make capital improvements.” The ESOP Game is customized for every company — building business knowledge personalized to your business. “So, we talk about choices related to how our company is performing which is what makes it so relevant and educational,” added Jones.

Ashley Walters, President of Onex, sought out the ESOP Game to help employees familiarize themselves with the concept of their new ESOP and continue to build their ownership culture. “Anytime we are doing training, if there’s a hands-on aspect, I choose to do that instead of a presentation,” said Walters. “I thought it was really great that employees started to think like a business owner and started to understand we have to make choices, and then they learned how an ESOP operated and how share value increased.”

Fun way to learn that your job matters

Employee owners at Onex were excited to continue learning and expressed interest in playing the game again with modifications to examine the production side of their business. “I think the game really shows the employee owners how they can impact personally the financial health of the business and that their individual decisions really do matter,” said Walters. Onex is in its first year of employee ownership, so the ESOP is still a new concept.

Playing Workplace Development’s ESOP game makes often abstract ESOP concepts and operations come to life. Because it enables employees to see how their actions matter, how the company will be valued and what their statement could show. Walters felt the game could be impactful in the future as employees begin to receive their ESOP statements and see how their value of their accounts changes from year to year.

To discuss how to bring the ESOP Game to your company, contact Workplace Development’s Jim Bado at 419-427-2435 or jbado@workplacedevelopment.com.