Let’s put the negative onslaught of 2020 in the rearview mirror and have some fun discussing what Marvel’s Avengers can teach us about employee ownership. 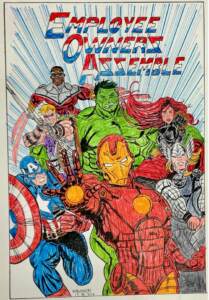 Captain America was frozen in a block of ice for 65 years before being revived. Talk about star-spangled resilience! ESOPs have proven just as resilient, especially during challenging times. A recent Rutgers study funded by the Employee Ownership Foundation found ESOPs have drastically outperformed conventional companies during the pandemic in terms of retaining jobs, maintaining wage and benefit levels and providing safe work environments.

This isn’t surprising because ESOPs, like Cap’s red, white and blue shield, are as American as apple pie and baseball. Even in increasingly divisive times, both Republicans and Democrats support employee ownership because it provides better long-term job stability during a crisis than short-term government spending.

It’s important to communicate the long-term nature of ownership because, due to the coronavirus’s economic impact, some companies may see short-term stock-value decreases. Overall trends are much more important than the results of any given year. Iron Man didn’t give up when the villainous Thanos “won” in the short-term. He stayed the course, kept fighting and ultimately won. As employee owners, we need to do the same.

Hulk: Perseverance
What can a gigantic green monster who sneers “Hulk Smash” teach anyone about employee ownership? Remember, Bruce Banner transforms into the Hulk and, by the final Avengers movie, learns how to manage and control the change. Successful ESOP companies do the same.

While they don’t “Hulk out”, they find ways to control the chaos, including the current situation, in order to grow the business and ESOP stock value. They know success is about being stronger when we reach the other side of the current economic disruption. If you find yourself in a corona-created rut, take a moment to “Hulk out” of your comfort zone and try something new. It will benefit you and your company. Just don’t smash anything (because that will hurt stock value).

Golden-haired Thor becomes part of several teams during Marvel’s movies, working with the Warriors Three, his mischievous half-brother Loki, Hulk and Rocket Raccoon (whom he calls Rabbit). Given that story arc, what can employee owners learn from the Thunder God? That diversity is a strength, not a weakness. Having co-owners of different ages, backgrounds, genders, races and creeds not only generates new ideas, it inspires innovative solutions to challenges. The wildly diverse individual Avengers, including Thor, coalesced around the common goal of defeating Thanos. Employee ownership provides your diverse team with the common goals of “defeating” the competition, making your company as successful as possible and growing ESOP stock value.

Black Widow: Strategy
As a former KGB assassin working for Marvel’s equivalent of the CIA (SHIELD), Black Widow seems an unlikely archetype of employee ownership. But because she lacks superpowers, Black Widow uses brains, technique and training to outsmart opponents. As ESOP businesses, we are much more powerful when we engage employee owners’ minds and skills. Employee owners have plenty of ideas and talent. We need to create and strengthen effective, two-way communication channels, especially in the current environment, for them to share those ideas and utilize their talents.

Spider-Man wasn’t one of the original Avengers, although he did play an important role in many of the stories. As many fans know, his famous saying is “with great power comes great responsibility”. In an ESOP context, this applies not only to the ESOP trustee, Board of Directors and company leadership, but to all of us as members of the ESOP community.

Our movement, if I may be so bold to call it that, is a powerful means of addressing some of America’s ills, like wealth inequality. It creates more economic justice without any government intervention. It’s our responsibility to spread the word. We need to bring more ESOP heroes into our group of excellent companies, outstanding service providers, successful nonprofits and hard-working academics.

Because when we all do that in our companies and our communities, our power is hard to defeat.

This article is modified from one originally published in November 2020’s ESOP Report.