Just Say Yes to Yourself and Your Company’s Ownership Culture

It started with the cell-phone call. 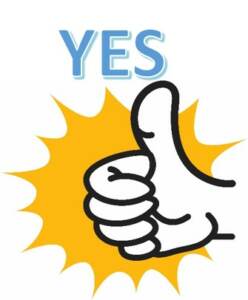 “Hey dad,” said my daughter, Emory, “you want to run a half marathon with me?”

No, absolutely not, screeched my suddenly alert mind. Because, despite clumping countless miles during the last four decades, I’ve rejected every half-marathon offer, even those accompanied by free brats and booze, and stuck to slogging 5k and 10k races. The problem wasn’t physical: my body could do it. It was mental: I didn’t want to put in the time, toil, sweat and strain needed to prepare for 13.1 pavement-pounding miles. But when your adult daughter asks you to do something with her….

Clicking open Toledo’s Glass City Half Marathon’s email confirmation, I considered why we find it so hard to say yes. And how often we say no. A Google search confirmed our no-driven dispositions: “Why do people say yes” produced 2.35 billion results. “Why do people say no” tallied more than twice that number: 5.65 billion. Maybe “no” being one of the first words we learn as babies drives our negative approach. Maybe we hear “no” so much growing up that it becomes our default response. No protects us from uncertainly. It keeps us from getting harmed, being embarrassed or failing. If safety means risk avoidance, then no is the safe answer.

But playing it safe is a risky strategy that can become the quickest route to failure. We, of course, can’t say yes to everyone about everything as we work to build an ownership culture, but we ought to say yes more often. Because saying yes can lead to these positive benefits:

1) Stick with a plan and envision success – Agreeing to run 13.1 miles made (ok, forced) me to adopt and stick with a training plan. Did I Gorilla Glue adhere to the so-called strategy of slog? No, of course not. But having a plan and envisioning crossing the finish line propelled my tired form through miles 6-11 of too many training runs.

Three decades of experience working with ESOPs has shown that a common stumbling block to building an effective ownership culture is failing to create a concrete plan with specific goals, tasks and responsibilities. Investing the time, energy and resources to lay out your strategy can be the first step in your commitment to achieving your ownership-development goals. Envisioning the future benefits of employees acting like owners can help keep you on track when things get tough.

2) Make the impossible possible – If you try to jog 13.1 miles without proper preparation, you may find yourself reading this from a hospital bed. If, however, you break any large, seemingly impossible endeavor into small steps, you’ll be able to accomplish it. You truly run the race one sweaty step at a time. 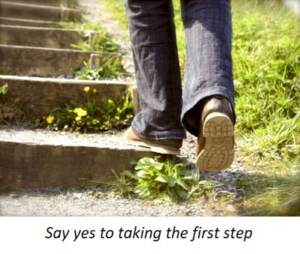 Think about your professional development and the creation of your company’s ownership culture. Have you been putting off saying yes because the task seems impossible? Have you said no because you believe, no matter what you do, it will never happen? An ownership mentality doesn’t materialize overnight. It’s the result of many small, deliberate steps. What would happen if you took one small stride toward building a group of informed, engaged employee owners at your company? One step is the first step toward making the impossible possible.

3) Eliminate regrets – When we review the story of our life, we often regret what we didn’t say yes to, things we avoided even attempting, much more than what we tried at and failed. Saying yes gives you an opportunity to succeed. It opens you up to the possibility of a brighter tomorrow. You can only experience the joy of finishing the race, if you start the event and accept the possibility that you will not complete it.

Saying no may protect you from failure, but it also leads to the “could have, should have, would have” syndrome. In other words, regrets. What’s the one thing at work or in your personal life that you would do if you could? What, for instance, could you change at your company to foster an ownership mentality? What’s stopping you from doing it?

4) Overcome obstacles – With the road-warrior work schedule and Netflix, there were myriad reasons to miss jogging the training mileage. But, because I agreed to the goal, had a concrete plan and made a commitment to my kid, I found myself lumbering DC’s Smithsonian Mall gravel oval, past Pittsburgh’s Heinz Field and extending the evening exercise routine within far too many stinky, stuffy hotel workout rooms.

There, certainly, are obstacles to accomplishing your goals at work and to building an effective ownership culture. You may even see them as overwhelming. If you do, they can defeat you before you begin. Instead, say yes and get moving to achieve your goals.

5) Personal growth – Yes forced me out of my clumping comfort zone. It caused me to rumble beyond the 5k and 10k running rut and learn something new about myself and running.

What can you say yes to at work that will help you grow personally and professionally? As an employee-owned company, developing an ownership culture with engaged employees can lead to higher productivity, profitability and ESOP stock value. Given those benefits, what’s stopping you from saying yes? If you have a good support system, you’ll feel better about saying yes, rather than no, even if things don’t work out because you tried. If you fail, at worst, you’ll have learned what not to do. And knowing that moves you another step closer to success.

6) Be “toenail” tenacious – About two weeks before the race, I shattered my second big toenail (who needs them anyway, right?). A purple-black blood blister swelled under it, causing my foot to experience a tiny death every time it hit the pavement. My doctor’s office said 1) they had no openings to look at the nail of nastiness and 2) I needed to visit a podiatrist anyway. A foot doctor visit wasn’t going to happen before I “toed” the starting line, so I, ah, fixed the problem myself (I’ll spare you the oozy, ugly Dr. Pimple Popper/Toe Bro details, but Emory recommended getting them surgically removed like “real” runners do).

When you say yes to any new endeavor, as most of us know, the path to success isn’t all sunshine and roses. Nor, despite the effort required, is it guaranteed. No one ever accomplishes anything worthwhile without some struggle. Study after study has shown the value of creating a workplace where employees think and act like owners. With luck, developing your ownership culture won’t destroy any toenails, but it will cause you and your company’s employee owners to fight through some challenges. People will need to grow and change the way they’ve always done things. Some, alas, won’t be able to change and will become the corporate equivalent of broken toenails. Most, however, will make it, becoming stronger, more resilient and confident. 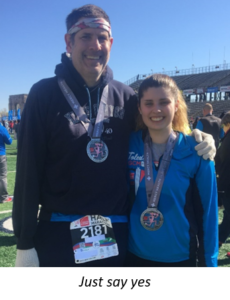 7) Build lasting connections — Saying yes gave me and Emory a shared goal we could discuss and enabled us to spend race weekend together – nuff said.

Connections are critical to the successful development of your ownership culture. Are you creating opportunities for employees to network both at your company and outside of it? Simple things, like luncheons, give people a chance to meet. If you’re sponsoring events with food, encourage people to eat with their peers, rather than retreat to their offices and munch lunch while working. Because lasting employee-owner connections become the mortar gluing the foundation of your ownership culture together.

A month after finishing the Toledo half marathon, the cell phone buzzed. It was my daughter.

“Hey, dad, you want to run another half with me this fall?”