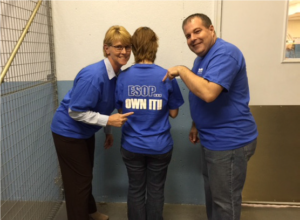 The ESOP Communication Committee at Robin Industries started its first year with a bang!  They held a T- shirt slogan contest, an ESOP flag raising event, an informational “scavenger hunt,” a contest to catch people acting like owners, and they hosted an ESOP poster contest. In addition, they mustered up the guts to stand up in front of hundreds of their co-workers and speak at the first ever ESOP shareholder meeting. “We are not professional speakers and I know that we stumbled a bit. But people told us they really enjoyed that part of the meeting,” says Wendy Leach, chair of the committee.

Sometimes ESOP committees have this kind of immediate success; other times they struggle for years to get activities going. What’s the secret to getting a committee launched with energy and purpose? It is not one secret but instead a combination of factors.

Committees often think that their main problem is a lack of ideas.  Certainly having fresh content and new activities matters — many of our mature ESOP clients are looking for new approaches. But committees that get going quickly and thrive in the long run have more than just great project ideas — they have clarity of purpose and structure. The secret is a combination of ideas, purpose, and structure that meet a business need.   Otherwise, what’s the point of it all?

Robin is a successful family-owned business that is transitioning to a healthy ESOP-owned business.  The ESOP Communication Committee has the job of facilitating communication about the ESOP, helping to field questions, plan and run activities that build awareness and encourage all employees to “think and act like owners.” The Committee is composed of members from various locations and parts of the business that don’t always get an opportunity interact with each other. Members are becoming more informed about the ESOP and the business because of their participation in the Committee.

With multiple locations in Ohio, Robin Industries is an innovative manufacturing company providing custom designs, engineering, and high quality manufactured rubber and plastic products. The company also has facilities in Mexico and China enabling the company to efficiently supply its customers with products to locations around the world.

The components that Robin manufactures require the highest standards of quality and reliability. “What people do each day on the job matters for our success. This means that awareness about our shared reward in the ESOP is important,” says Mark Fischer, president of Robin Industries. “The Committee did things this year that an executive team just can’t do. If I had tried to do what they did at our shareholder meeting last year, it wouldn’t have been the same at all. If human resources or managers had tried to implement the same activities during Employee Ownership Month, I don’t think people would have gotten as involved.”

Contact Cathy Ivancic at 330-896-7285 or civancic@workplacedevelopment.com if you’d like to improve the effectiveness of your company’s ESOP Committee. WDI works with newer committees like the Robin Industries ESOP Communication Committee and more mature committees that want to recharge energy or rejuvenate their business purpose.