In a year when all businesses were facing uncertainty, Hatco Corporation was certain that sustaining employee empowerment and expanding business knowledge was an important part of its continued success. “We want everyone to understand the business, but I don’t think the way to do it is to make everyone read the financial statements,” says David Rolston, President of Hatco Corporation headquartered in Milwaukee, WI. “Let’s face it, statements aren’t real engaging. I have to read them but honestly, I don’t enjoy it. I know that we need to find other ways to illustrate how individual jobs are connected to our company performance.”

A manufacturer of commercial food service equipment —such as the familiar cabinets that display pizza slices and the large-scale toasters used for institutional foodservice — Hatco Corporation established an ESOP to purchase 49 percent of the company in 2004. The founder, David Hatch, has no children and always wanted to pass the company on to the employees. The company became 100 percent ESOP owned in 2007.

“Empowerment has always been part of our company’s core values even before we became ESOP owned,” explains Rolston. “Our founder believed in empowerment. He used to say that I would know I was doing a good job as a leader when I was confident that everyone else was taking care of the day-to-day needs of the business.” The challenge for Hatco — and other companies with a strong culture of involvement and empowerment prior to implementing an ESOP — is finding new ways to sustain and extend that environment for the long term. 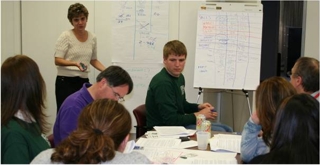 Committed to providing employees with useful information about business performance to keep them engaged and empowered, leaders know the importance of everyone understanding his/her own role in the business’s success. Through monthly reports and meetings at least four times a year, leaders openly discuss sales and profits using graphs and easy-to-read charts. To deepen the impact of this dialogue about performance, the company invested in a training program in 2009 to clarify ownership roles and expand employees’ business knowledge. The customized training included Workplace Development’s ESOP Game — a business simulation where employees learn through the experience of making decisions as a team for a simulated ESOP company, rather than through lectures.

“It hit home that a lot of the decisions made at an executive level are extremely complex. I watched people quickly see that the strongest impact they can have on our company success is to perform their own job the best that they possibly can,” says Kimber Simos, Director of Human Resources at Hatco.

Trying on a leadership role during the simulation changed employees’ perspectives. “I was a bit surprised when almost no team decided to raise wages rather than grow their simulated business,” noted David Rolston. The session illustrated the tradeoffs in running a business, roles and responsibilities in an ESOP, and the range of factors that impact stock value.

To run the ESOP Game, Hatco used a team of in-house facilitators who received training and a guide for helping their co-workers. The members of the facilitator team got a front-row seat to watch their co-workers learn. They saw people gain new perspectives on involvement in decision making when hundreds of people share ownership. The facilitators overheard comments like, “Now I understand why we don’t vote on everything…it would take forever for decisions to be made;” and “nothing would get done if we all participated in every decision.” The experience reminded participants that empowerment works best when people focus on the areas they are most expert in — their own job-level challenges.

Interactive learning — like Workplace Development’s ESOP Game business simulation — provides an opportunity for your long-term employees to teach newer ones what is expected of employee owners. It also gives everyone an opportunity to experience and feel the big picture challenges in your business environment in a tangible way. “I’m so glad that we were able to customize the session to fit the current challenges we face,” says Kimber Simos. “People learned much more when they focused on things that were really affecting our business today.”

Hatco Corporation has a long history of emphasizing employee involvement and empowerment, but that doesn’t mean that it is done cultivating and expanding this important component of its successful culture.