Skip to content
Your Recruitment and Retention Edge: Employee Ownership
Schedule a Call 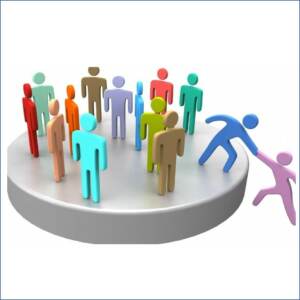 In June 2018, the Bureau of Labor Statistics announced that U.S. companies added 233,000 jobs, extending the economy’s monthly job-creation streak to almost eight straight years. Given it’s getting harder to find and keep excellent employees, are you making the most of your company’s unique recruitment and retention edge: employee ownership?

Your ESOP gives you a clear competitive advantage, but only if you effectively communicate its value to current and potential employees. If people don’t see its benefits on your website, learn about its wealth-building potential in your offer letters or are engaged as employee owners in their daily work, you’re squandering your ESOP’s power.

Here are three practical ideas you can integrate into your electronic, written, video and face-to-face communications to “cash in on” your ESOP recruitment and retention dividends.

1) ESOPs are rare and valuable.
U.S. Small Business Administration (SBA) statistics estimate that there are 11 million small companies in the United States. Of those, the National Center for Employee Ownership, a not-for-profit research organization in Oakland, Calif., estimates that only 6,700 are ESOP companies. That means less than one percent of small businesses offer employees this opportunity for long-term wealth building.

Does your current workforce realize how unique it is to participate in an ESOP? That they are part of a different 1% (the ownership one percent)? Do they know how unlikely another company is to offer ownership like your firm does? The same holds true for people you’re trying to recruit. Unless you educate them and differentiate yourself as an ESOP business, they probably won’t realize how unusual the opportunity is.

2) It’s provided at no cost.
Another compelling, attractive ESOP feature: it’s most often provided to employees with no out-of-pocket cost. That fact can create unwarranted skepticism because to participate in America’s most well-known retirement plan, a 401k, one must contribute his or her own money.  ESOPs that operate like “KSOPs” — offering company stock as a match on employee deferrals -— are almost always more attractive than a 401k in a non-ESOP company. But, unless you invest the time to compare your ESOP with the typical retirement plan, most people won’t know how different it is and recognize its impact on their own wallet.

Another selling point: the average ESOP contributes the equivalent of 6-8% of an employee’s annual wages to the plan, compared with 2-4% in a traditional 401k. Some ESOPs contribute even more. You, of course, should use your plan’s numbers to illustrate how employees benefit. And, to increase employee retention, make the most of your annual ESOP statements to highlight your plan’s benefits to current employees. If an employee leaves, he or she might forfeit ESOP shares and is very unlikely to earn that benefit back at another company. Once again, don’t expect people to know that fact: you’ve got to communicate it.

3) It’s about your culture.
Most people get a job because they need money. They stay with a company when a job meets both external (money/benefits) and internal rewards. Your ESOP is a great tool to build an ownership culture because it rewards people both monetarily and intrinsically. (See our website’s News You Can Use for practical ownership-culture development ideas).
Sometimes, because the financial rewards can be substantial, companies get caught up communicating their ESOP’s monetary benefits and forget to focus on the cultural ones. So, remember to communicate the internal (intrinsic) benefits of employee ownership by:

b) Creating open communication channels and opportunities for involvement
ESOP firms that value employees’ ideas, opinions and input are much more successful serving customers and growing the business profitably than those, both ESOP and conventional, that don’t. People often leave companies because they feel disconnected from their bosses, co-workers and the company’s overall strategy and mission. What is your company doing to encourage more employee involvement and engagement?

c) Delivering praise, recognition and feedback
It costs nothing to say thank you for a job well done. Some people believe only managers or supervisors can provide positive feedback. That’s not true. In many successful ESOPs, recognizing a co-worker’s contribution is part of “acting like an employee owner.” What is your company doing to build and sustain an environment that fosters an ownership culture?

If you’d like to discuss how Workplace Development can help you make the most of employee ownership, please contact Jim Bado at jbado@workplacedevelopment.com or 419-427-2435.