Play ESOP Bracketology to Win the Game of Ownership

No one would propose you watch the NCAA Tournament without understanding basketball’s rules. The same holds true for your ESOP:  knowing the plan’s rules builds understanding of and appreciation for the opportunity employee ownership provides. 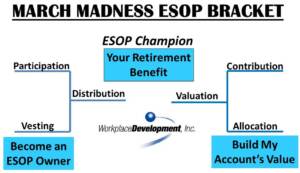 While people often “just guess” when they fill out a tournament bracket, Workplace Development’s “ESOP Bracket” removes the ESOP communication and education guesswork. As you can see, our bracket illustrates the key components employees need to know to be active, engaged players in the game of ownership at your company.

The become an ESOP owner bracket features:
Participation – when and how do I join our ESOP? Plan rules differ, so make sure new hires know what requirements they must meet to become part of your ESOP team. While you’re working on this bracket, invest time to develop materials that communicate the benefits of ownership to potential hires. Your ESOP becomes a powerful recruitment tool when people understand its benefits.

Vesting – when do I own the ESOP benefit? Most companies utilize a three-year cliff or a six-year stepped vesting schedule. There can be different requirements to earn vesting credit, like the number of hours one must work in the plan year, so double check your plan’s rules.

The build my account’s value bracket contains:
Contribution – how much did our company put into the plan last year? Contributions can be made in stock or cash. The amount can be based on your ESOP loan, repurchase obligation, company performance or some combination of these. As you fill in your bracket, remind ESOP players that contributions are discretionary and not guaranteed.

Allocation – how much of the company contribution did I receive? Many plans allocate to employees’ individual ESOP accounts based on compensation. Because some use other formulas or compensation in combination with another factor, like tenure, remember to check your plan’s rules to ensure all your ESOP players understand how they earn the ESOP benefit.

Valuation – what are the ESOP shares worth? Your ESOP trustee works with an independent, qualified, third-party appraiser to help them determine your company’s stock value. This bracket is critical because, by law, the ESOP’s assets are primarily (more than 50% invested) in company stock.

Remember the scoreboard!
Just like fans and players follow the score during an NCAA tournament game, ESOP players read their annual statement to keep score in the game of ownership. Take time to ensure everyone knows how to read your participant statements because, if you can’t track the score, the game isn’t very engaging or fun.

Distribution – when do I receive my ESOP benefit? As a long-term, wealth-building strategy, the ESOP pays benefits at your company’s normal retirement age (often 65, but not always). It also can make a distribution if an employee leaves the company before retirement. Check your plan before you educate players about this because special rules and the vesting schedule normally apply to pre-retirement distributions.

Be an ESOP Champion!
Unlike the once-a-year NCAA Tournament, ESOP players continuously participate in the game of ownership. Becoming active players who help their company profitably serve customers, operate more efficiently and win every day in the competitive market, starts with every player understanding their “ESOP Bracket”.

To discuss how we can work together to explain your ESOP bracket and engage employees in the game of ownership, email me at jbado@workplacedevelopment.com