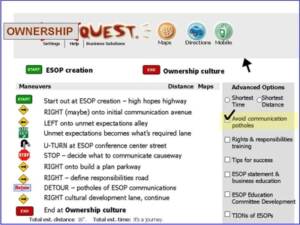 Spoiled internet junkies type their destinations into MapQuest and, in nanoseconds, the website spits out clear directions from one point to another. Wouldn’t it be great if you could do the same thing for your ESOP?

If you are searching for the directions to create a company of employees who think and act like business people, then you’ll need to answer some critical questions along the way.

These questions swell in importance as employees wade through the current tide of negative ESOP/retirement planning stories. Like it or not, tales of “retirement gloom and doom” are not going away. If you don’t talk about your ESOP plan, you can be sure that someone, somewhere will. And most likely, their message will be negative. To gain the substantial benefits of ESOP ownership, you’ve got to communicate both the positive and negative aspects of your plan. The $64,000 communications question: what direction should you take on your ownership quest?

During our 20 years of working with ESOPs, Workplace Development has seen many of the twists, turns and potholes you’ll encounter on the road to building and sustaining a successful ESOP culture. It’s also shown us that each firm is unique. Your culture, people and ownership journey are different from other firms’ experiences. While it’s impossible to give you specific directions, we can alert you to some of the common potholes you ought to steer clear of.

Pothole 1: People need to “get it”

Management starts its ownership quest with high hopes, believing employees will “get it” when the plan’s announced. It’s free and it’s ownership, what could be better? Of course, it’s also complicated and confusing. And its “freeness” directly contradicts what parents have lectured their children about since time began: “you don’t get something for nothing.” Announcement day comes and goes. People sigh, emit a collect ho-hum and wander back to their jobs. The result: they don’t get it. They do get confused, often real confused. They mumble to each other: are we really getting something for nothing? They don’t understand the plan or its benefits, and that confusion leads to pothole two.

Some employees do hear they’re now owners. Unfortunately the role of an ESOP owner often remains undefined. Employees fill in the “blanks,” often assuming that the role of an owner is having more input on strategic decisions, exerting greater control over their daily jobs, gaining new knowledge about the company’s business operations and financial status or whatever “rights” they think accompany ownership.

Federal ESOP law requires none of this. Some firms chose to go beyond federal requirements, some do not. What many fail to do is clarify the roles that ESOP owners play. Without role clarity, an ownership quest can crash in the chasm between what’s required under the ESOP law and how people perceive ownership.

Pothole 3: Looking for easy answers outside your business

There are many interesting, wonderful and inspirational stories at conferences and lots of technical information to gain through webinars, books and national events. Unfortunately, specific answers to your particular communication challenges won’t be forthcoming. Applying what you hear about other firms is tricky: your firm is has a unique history and faces its own set of challenges.

While communication and education potholes, like unmet expectations, may be similar, how they affect your company isn’t. Trying to replicate what one reads in an article, sees during a webinar or hears at a conference — without taking your own culture and challenges into consideration — often leads to failure, rather than success. When supposed solutions create more problems, people grow even more disenchanted with ownership.

Pothole 4: They’ve heard it all before

When people understand what ownership means, you’ve avoided unmet expectations. Sustaining success becomes your challenge. Maybe you’ve done the ESOP statement “dog-n-pony” show so many times, you’re sick of hearing it yourself. Creative energy has evaporated and you’re recycling the same flyers, handouts and PowerPoint presentations over and over. You might have two distinct employee groups: senior folks who get it and new hires who don’t get it at all or multiple locations with different needs or some other new challenge. Whatever the reason, you believe the ownership message is falling on deaf ears.

Your best opportunity each year to change your communication approach is when statements come out. Most participants receive a statement of their account’s value once annually. To capitalize on this opportunity, companies need to send the same message but play a different tune.

Add some zest to your ESOP plan communications; throw in some jalapeños to spice it up by injecting some humor and creativity. Contrary to popular belief, ESOPs are interesting and fun! Keep people engaged and interested or they’ll zip their lips, which leads to pothole five.

When people don’t ask questions, talk outside the meeting or wonder what’s going on, that’s a sign of disinterest, not understanding. Effective communication, just like good road maintenance, is never finished. Successful maintenance means replacing worn roads before they become pothole breeding grounds. It also means filling new holes as quickly as possible before they turn into driving hazards.

Layout a roadmap for your ownership quest and follow it toward your destination, always remembering that success is a journey. Successful ESOPs make ownership part of an employee’s experience from the beginning. As people progress through their career, you’ll want to recognize the achievement of many milestones (from joining the plan to becoming fully vested to diversification and beyond).

As you drive toward an effective ownership culture, remember it’s a journey not a destination. People want to understand where the firm is headed, but the backseat drivers are still out there. Seize control of the process and begin your ownership quest. Because if you don’t tell your ownership story, someone, somewhere will.

Call Jim Bado at 419-427-2435 or email him at jbado@workplacedevelopment.com to get a custom road map in building an effective ownership culture.