With the basketball bedlam known as March Madness about consume America, let me share a few leadership lessons gleaned from the younger generation that will enhance your ownership culture: the rules followed by Van Buren Ohio’s 6th grade girls YMCA basketball squad.

To be successful, young players must learn basic fundamental skills. Repetition builds mastery, but the repetition must be enjoyable or it becomes a turn off. Lay-up after lay-up gets dull; turning it into a game transforms dull into fun.

Like basketball, successful ESOP communication and education efforts must also focus on fundamentals. Until people realize “what’s in it for me?” with your ESOP, they won’t pay much, if any, attention to it. Nor will they show much interest in building your firm’s ownership culture. You wouldn’t, so why would they?

– How do I participate in the ESOP?
– Why do we have an ESOP?
– What are employee ownership’s benefits?
– How are allocations made to my account?
– When do I get the money?

Remember, successful ownership communications repeat the fundamentals, saying the same thing in different ways to help people “get” it. Just like with basketball drills, making communications enjoyable enhances understanding (i.e., emphasize the “fun” rather than the “duh” of fundamentals).

A good team will defeat an outstanding individual almost every time. To be an effective team, basketball players need to learn their roles, how to work together and when to help each other on offense and defense. It’s much easier, for example, to move the ball up the court with passes, instead of dribbling.

Successful ESOP businesses, of course, see themselves as teams and have employee owners who understand their roles and responsibilities in making the company successful. They build a line of sight from employees’ daily activities to company success and ESOP stock value.  To accomplish this, you’ve got to define what it means to be an ESOP owner at your business.

Ownership is a powerful word in America that has different meanings to different people: what does it mean to be part of Team ESOP at your company? Is ownership a retirement benefit, a strategy for improving the company or an integral component of your company’s culture? Is it all of the above? Whatever ESOP means, be clear about it. If you’re not, people will operate with their own definitions of ownership. Those may be in alignment with your company’s goals, but, most likely, they won’t be. Not knowing how the team operates creates unmet ownership expectations and problems down the road.

During practices, we asked the girls who they ought to respect. Their answers: parents, grandparents, teammates, coaches, opponents and the referees. Clearly, the kids knew this rule’s importance. It was up to the coaches to make it part of the team’s culture by modeling r-e-s-p-e-c-t in everything we did.

Your company, of course, is not a 6th grade YMCA basketball team, but respect and trust are the foundations of your ownership culture. As you know, they’re earned, not given. It’s one thing, for example, to talk about an open-door policy (and what company has a closed door one?), it’s a completely different thing to encourage the true openness and respect an open-door policy implies. To develop that, you need to actively solicit people’s opinions and ideas. While the door may be open, most people – for all kinds of reasons – refuse to walk through it.

Second, leaders, at all levels, need to understand your ESOP, their role on the team (see lesson #2) and that an important part of their job is to sustain and grow your ownership culture. Given today’s hectic business environment, that can be a challenge, but actions speak much louder than words. You can hand out all the “I’m an Owner” t-shirts you want, but if leaders’ actions don’t follow the symbols, the symbols become hollow. 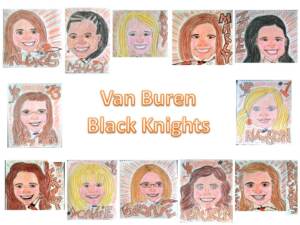 If, like Van Buren’s 6th grade YMCA girls basketball team, you live by these lessons, good things will happen. There’s no rocket science here nor in the team’s two other rules (i.e., hustle and pride). The challenge is sustaining the effort, sticking with your rules in the face of adversity and keeping your core values when, as often happens, violating them would lead to a short-term gain.

In a month, March Madness will be over, but your journey to building a successful ESOP will continue.  Remember, at the end of the day, the simple things are often the most difficult and rewarding to master.