We strolled past a brick wall, turned a sharp corner and the glowing, green eyes twenty-feet away stared at me. Atop a four-foot high stack of rolled paper, the calico licked a paw as nearby machines clanged, sliced, whirled and banged a cacophony of capitalism. The successful manufacturing company, BSC Ventures, had just transitioned to 100% employee ownership, but, in more than a quarter century of between-employee-rollout-meeting plant tours, this was my first encounter with a feline employee owner.

“Er, the cat,” I muttered to my affable tour guide, Derek.
“Oh, yeah, I forgot to tell you about them,” he replied with a chuckle before relaying the cat tale. 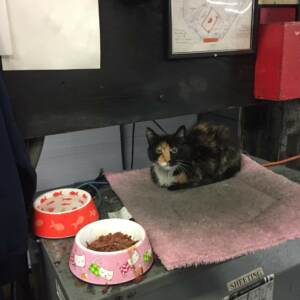 The company’s downtown Baltimore plant had struggled battling the local rats. Weekly visits by an exterminator did little to arrest the infestation. The rats always returned, stronger, hungrier and more resistant to the toxic mix. The facility continued the effort, spending more money to spread more chemicals with limited success. Derek described large rats with thick tails scurrying near the green trash dumpster. In other words, a bad situation that, despite the company’s investment of money, time and effort, wasn’t improving.

Until a feral cat wandered into the factory. Soon after, another ambled across the concrete production floor and, as cats will do, they hooked up and created some kittens. BSC Ventures ferried four felines to the Human Society to get their shots and be fixed (i.e., no more kittens). The furry force now lives inside the facility; employees take care of them; the rats are long gone.

The surprising encounter made me consider how often we skip, ignore or discard a simple solution in favor of complexity. Hopefully, you don’t have a rat problem, but I’m sure you have a challenge that seems to defy an easy answer. For example, ESOP plans, by their nature, are complex legal and financial tools, difficult to implement and even harder to explain. In fact, we have a business because we’ve developed effective, practical tools to simplify ESOP ownership, engage people in building successful ownership cultures and connect employees’ daily work with company performance. Building an engaged, ownership culture, of course, takes time, effort and persistence: it doesn’t occur overnight. 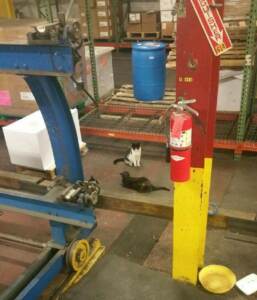 If you’re like most companies, there’s something simple you can start doing to engage employees as owners. A “meow solution” that will produce beneficial results for the company and employee owners in both the short and long-term.

If you want to communicate your ESOP’s benefits and engage employees in your ownership culture, contact Jim at 419-427-2435 or jbado@workplacedevelopment.com