Communicate the Deeper Meaning of a New ESOP 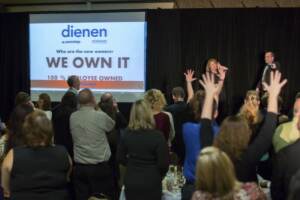 A collective gasp filled the room when employees heard Bernie and Pam Veldman announce last January that — after careful consideration — Dienen Inc. was being sold to new owners. The room was bursting with mixed emotions: fear of the future, sadness, confusion, and shock. Employees of this South Bend, Indiana, company fell silent for a few moments, then mustered a smattering of uncomfortable applause.

Bernie, the president of Dienen, looked at the door as if he were going to bring in the new owners. Then, with dramatic flair, he and Pam announced that the new owners were the employees — made possible through an Employee Stock Ownership Plan (ESOP). The group burst into an enthusiastic applause, although they probably had absolutely no idea what this meant. ESOP ownership sounded better than the not-so-attractive alternatives they were imagining: sale to a competitor, sale to an investor with a short time horizon, or sale to someone who doesn’t understand their business.

Dienen — the parent company of Midwest Orthotics and Surestep –provides clinical services and a complete line of products for children with developmental challenges. Employees are driven by the company’s mission “to enrich and transform lives.” In this case, it was essential that the ESOP rollout was not a simple announcement of a new benefit, but the start of a journey that will sustain a legacy. Associates from Workplace Development Inc. provided services to help Dienen’s leadership team anticipate questions, run the large group presentation and then provide smaller group meetings to answer specific questions and demonstrate visually exactly what had taken place.

For a mission-based company like Dienen, this kind of dramatic announcement captured the excitement of the transition but also clarified the advantages for everyone. While the initial meetings covered the key plan provisions — like when they are eligible and how stock is allocated — it said so much more than that. The most important messages were about why the ESOP was established and what it means going forward. Employees may have left the meeting forgetting the exact vesting schedule we outlined, but they won’t forget that this ESOP is a strategy implemented to share rewards and sustain the company’s mission into the future.

Rolling out a new ESOP provides a great opportunity to clarify your company’s unique messages about what this transition means for employees, and to set expectations for the long-term future of the business.  Don’t worry if you missed your initial chance, however, because it’s never too late to start communicating the essential ESOP messages. Even without the element of surprise, you can communicate the powerful reasons the ESOP is right for your firm and the possibilities it holds for the future.